Small and independent presses are real treasure troves for great stories that you won’t necessarily see splashed across ad banners and subway stations but they. are. so. good. As much as I love seeing lists like this one pop up, there are so many indie titles that I would have LOVED to discuss with my friends over guacamole and wine (and, in some cases, probably would have helped me cope with my feeling afterwards)! So I’ve decided to make up my own lists, starting today, to spread the book club love around, even though my “book club” is basically just me reading with my cat in the room. (thanks for the inspo Buzzfeed!)
Full disclosure! Some of the books I pick will be from the company I work for, BUT were published before I got here, so I’m calling it a fair loophole.

It’s the end of May, thank god, and in between the weird rainy muck and whatever it is we’re calling weather these days, I’m gunning for the outdoors, hoping to reflect some sunshine off my sad pale winter skin. I don’t care if my goosebumps look like a gross infection, it’s summer dammit! And that means reading on the porch in a cottage chair.
May’s sendoff and the coming of June is always a happy school-aged time when classrooms became hot and stuffy, gym class moves outdoors and the countdown is on until the long summer days began when you can play outside until 9pm just because. Or, in your University days, it’s when you’d move back home and drink excessively with your hometown pals to make up for the 8 months you spent apart. So in celebration of mating bees, finished exams and growing gardens, I’ve compiled some excellent YA and coming-of-agers for the whole class.
Forever young, ya’ll.

Monoceros, Suzette Mayr (Coach House)
A heartbreaking, quirky, and compelling novel about the aftermath of a high school student’s suicide and its ripple effect through the unhappy lives of friends, family, and acquaintances. After being relentlessly bullied for being gay, Patrick Furey commits suicide in the opening chapter of the novel, the rest of the story follows a host of secondary characters throughout their own complicated, unraveling lives in the wake of this tragic event. Dealing with themes of sexuality, bullying, grief and faith, the title refers to the subject of unicorns and the young girl (a school mate of Patrick) who is obsessed with them. I loved this book with all it’s strange, misfitting and thoroughly flawed characters threads. While it tackles a serious subject, it does so in a way that doesn’t hide from the hard stuff, but instead burrows deeper into our most human makeup.

You Set Me On Fire, Mariko Tamaki (Razorbill) 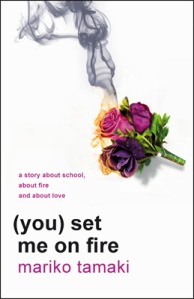 Allison, a college freshman skirts the edge of love and fire when she navigates a new social climate in first-year University. After being “burned” by her first love, then getting accidentally burned for real in a fire accident, Allison moves away from her shitty town for post-secondary. She falls hard for her floor-mate: the unstable-but-exciting Shar who lures her into a complicated and destructive friendship that quickly becomes  Allison’s whole world. Allison’s voice reads like my best friend, exploring the hard-learned lessons of life away from home, of lust, of friendship, and the initial not-so-perfect leap into adulthood. Her story is addictive, flinching, and wonderful reflective. 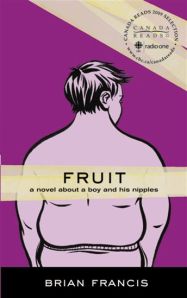 Fruit, Brian Francis (ECW Press)
Both a unique and familiar story, Fruit follows 13-year-old Peter through all of the unpopular, overweight, sexually confusing and awkward times of his middle school experience. His dysfunctional family, nagging classmates, and all the tropes and stereotypes of the school yard present themselves. All the while, Peter must deal with his inflamed and spontaneously talking nipples who do nothing but antagonize him. It’s kind of a heartbreaking story about the most awkward time in anyone’s life; where body issues, social issues, and personal growth clumsily begin searching for their rightful place. Peter talks to us in first person and his voice is so perfectly suited to his pre-teen sensibility, you’ll laugh out loud and feel for him until the very last page. 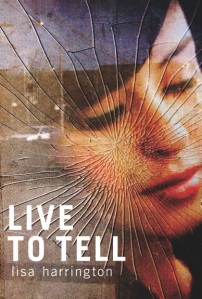 A surprisingly thrilling mystery about 16-year-old Libby who wakes up to learn she’s been in a car crash.  Someone is in critical condition, someone keeps calling himself her boyfriend, but nobody is really explaining anything and she can’t remember a thing. It’s a fast-paced read that’s realistic without being preachy and exciting without exploiting a tragic circumstance. The author has a firm grasp on teenaged story telling, her jargon is perfect and the surprising twists are expertly paced. Harrington has her school yard villains down pat and has grasped the manipulative, peer-pressure fuelled atmosphere of high school in this whammy of a novel.

Eleanor & Park, Rainbow Rowell (St. Martin’s Press)
This book has been popping up everywhere. All over my Goodreads, on HelloGiggles ev.ry.where. So I had to. And it’s pretty darn cute. The playful cover wraps around an unlikely 80s high school love story about “Big Red” Eleanor and quasi-popular Park. It’s one of those stories that’s got manic pixie dream girl written all over it. Like Zooey Deschanel tossing sparkles into Michael Cera’s ukelele while he and Joseph Gordon Levitt sing a duet on the front steps of a unicorn-shaped cupcake shop. YES I WENT THERE. But all that sounds good, doesn’t it? 1986: boy meets girl. It’ll make you feel good and sad and nostalgic and warm n’ fuzzy all over.